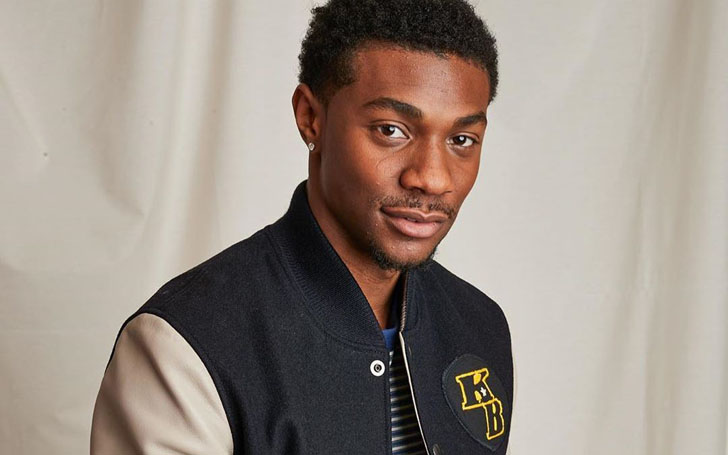 Jonathan Daviss’s school days were filled with sports, education, and acting; he was in the little league baseball team and later played for the Conroe Tigers in high school. But the love for sports was equally matched by Jonathan’s desire to perform on stage and pursue a career in acting. Now, in 2020, Jonathan is finally getting his chance; he is set to star in the Netflix series Outer Banks.

The actor was born on 28 February 1999 to his mother, Yulanda Creamer-Daviss, and father. He is one of four kids of his parents, and Jonathan is the only son in the family, he has one elder and two small sisters. All the kids love their parents and especially their dad, according to Jonathan’s younger sister, their dad is goofy, fun-loving, film quoting, and a nerdy person who loves his wife and family.

Jonathan Daviss went to school in Texas, and there he also developed a love for the art of performing. He wanted to be an actor, and after football was done, he was auditioning for roles in movies and TV shows. Jonathan got his first acting job in the NBC series Revolution where he appeared in a single episode, and seven years later, he is now starring in a Netflix series.

Jonathan Daviss was hired over a year ago in the Netflix series Outer Banks to play the role of Pope. His character is one of the members of the Pogues and also the smartest of the bunch; he is also the moral compass and cautious head of the crew. Pope comes from a low-income family, but his life is headed in a different direction, and a single summer may change everything for him and his friends.

Outer Banks is about a group of friends who are known as Pogues. They live in a place called Outer Banks, where there is a class divide, and the Pogues are not on the privileged side of things. During the summer John B, played by Chase Stokes, discovers clues about the disappearance of his father and also a possible treasure of $400 million in gold. But the thing is, John and his friends are not the only ones looking for the gold and know what happened to John’s father. Now, the Pogues need to figure out what they want, to get rich, or save their lives from people who want the gold for themselves.

Pope is a talented kid with a bright future and a college scholarship ahead of him, but he is also down for an adventure. Only time will tell if the adventure will lead to the Promised Land, or he will throw his future away in a single summer. Outer Banks will be released on 15 April 2020, only on Netflix, starring Chase Stokes, Jonathan Daviss, Madelyn Cline plays Sarah Cameron, Madison Bailey plays Kiara, Drew Starkey plays Rafe Cameron, Rudy Pankow plays JJ and Caroline Arapoglou plays Rose Cameron.

Jonathan Daviss Played Mathis in the Movie Age of Summer

Jonathan Daviss was in his early teens when he got a small role in the short-lived NBC series Revolution. He appeared in a single episode and then played Samuel Washington in the TV movie Deliverance Creek.

His next acting credit almost four years later, after he was done with high school. Jonathan played Mathis in the movie Age of Summer; the movie was about lifeguards, and there are some photos of the actor during the shooting of the film on his Instagram. The same year Jonathan appeared in another TV movie called Shattered Memories, and now he is set to play Pope in the Netflix series Outer Banks.

Some Facts About Jonathan Daviss Jonathan Daviss is 21 years old, and he has three sisters, he is close with all his sisters and his father. Jonathan recently shared a picture of the family at Disneyland, and there are also no shortages of images on his Instagram featuring his mother, father, and sisters.

The actor shares a love for anime with his little sister. He is a Kakashi Hatake fan along with his youngest sister. Kakashi is a character from the Naruto manga and anime series, and there are some pictures of the actor cosplaying the character. Jonathan also loves to sing, and he frequently covers popular songs for his fans on his Instagram page.

Jonathan Daviss played football in high school, and according to his sister, he also was in little league baseball. Jonathan played wide-receiver for Conroe Tigers of the Conroe High School, located in Conroe, Texas.

Social Media Presence of Jonathan Daviss – Does the Actor Have a Girlfriend?

Jonathan Daviss frequents his Instagram page, and he is a good follow. The actor is on his way to 3,000 followers, and it is definitely going to increase after people see his performance in the Netflix series Outer Banks. The actor also posts cover songs on his Instagram, and there is also a funny highlight of Jonathan in quarantine, with mustache, shaggy hair, and everything.

The actor is not shy about posting his personal life on Instagram. There are many pictures of his parents and sisters, but none of his girlfriend or special someone. This leads us to believe the actor is currently single and currently focused on his career. He is a handsome man, and there is no denying a lady will steal him away pretty soon, so, better shoot you shot right now, people.