Zion Moreno was young when she decided to transition; it was a difficult decision, but Zion was born in a wrong body. She was born a boy, and transitioning was her taking control of who she was inside and who she wanted to live as, for the rest of her life. Years later, Zion Moreno is a famous transgender model and is slowly trying to make her mark in front of the camera as an actress.

The actress was born in El Paso, Texas, but her parents raised her in Albuquerque, New Mexico. Zion spent most of her young age in her hometown, and when she was old enough, she decided to pack her bags and move to New York. The move was inspired by her desire to make it in the modeling industry. Her dream became a reality when she was scouted in Manhattan by a modeling agency, which set her on a path to becoming a top model in the fashion industry.

But a person who was so sure to herself was not going to stop there; Zion wanted to try her hand in the movie industry. This led the actress to make another massive change in her life, she moved again, this time to Los Angeles, following her desire to make it in Hollywood. Her desire to excel in all aspects of the show business led her to the city of angels, and now she is living her dream, starring in movies and TV shows.

Form the trailer of Control Z; it is clear Isabela is the “It” girl of Colegio Nacional. She and her boyfriend Pablo are high school sweethearts and popular kids of the school. Life is okay for Isabela and Pablo, but when a hacker shows childhood videos of Isabela as a boy, life changes for the two and also for all the other kids in the school. Zion Moreno’s character Isabela is transgender, and the outing of the secret makes life hard for her, and a chain reaction causes trouble for all who have a secret.

Isabela does not take the outing of her secrets lying down; instead, she says yes to revenge when the hacker contacts her. The hacker is blackmailing people, asking them secrets about others so they can keep their secrets. This makes the school a volatile place for all the students and also causes turbulence in the lives of Isabela and Pablo. Control Z is about a school in Mexico where the lives of all the students are disrupted when a hacker starts leaking secrets. Sofia is a talented but socially awkward girl in the school, and after the hacker plays his/her hand, Sofia goes on a pursuit to find out who the person behind it all is. In her pursuit, she meets new student Javier, and they form a team to get to the bottom of the whole mystery.

Zion Moreno was the focus of the first season of Control Z, and she was also the standout performer of the series. The Mexican series from Netflix found a home worldwide, and Zion was the cast member who made the most impact. Her own story, combined with the script of the show, impressed fans the most, and Netflix understood the impact of the series, which is why Control Z season 2 is happening.

The actress was in a group chat with her castmates from the show when Ana Valeria Becerril announced that Control Z season 2 is coming. Zion will be coming back for season 2 of the hit series. It is still unclear how the show’s announcement affects Zion’s participation in HBO’s Gossip Girl Reboot.

Zion really shot to international fame after the release of Control Z. She had slightly over 60,000 followers on Instagram before the show’s release, and now she has close to 450,000 followers. The last week and a few days have been a ride for the talented actress, and the future looks bright for Zion Moreno.

Zion Moreno was 19 years old when she moved to New York in search of a career in modeling. She was scouted and signed by a modeling agency, and later joined Slay Model Management to continue her career. Zion worked as a model for a few years and once expressed her desire to be on the cover of Sports Illustrated Swimsuit Edition. According to her modeling agency, Zion Moreno is 6 feet tall, has brown eyes and hair, and her body measurements are; Bust: 32 / Waist: 25 / Hips: 34.5.

Modeling paved the way for the Zion to explore and try other things, which led her to acting, and her first acting role in the movie K-12. She played Fleur in the 2019 film, directed by singer Melanie Martinez as part of her new album. The actress was also hired to be in the cast of the HBO reboot of Gossip Girl. The series is currently in pre-production, and Zion was announced as a cast member on 11 March 2020. Zion Moreno has been tight-lipped when it comes to her own transgender journey, deciding to change her gender. There are no interviews where she talks about her experience and stories about her transition. But when Richard Simmons was in trouble with the trans-community, Zion came to his defense and also gave her view on the life-altering decision of getting surgery to change gender.

After he filed a defamation lawsuit against the Enquirer for its claim saying he was transitioning, Richard Simmons was made to be transphobic. Zion spoke about how it is not the paper’s business to out a transgender person; if Richard Simmons were trans, then it was his decision to make it public in the way he sees fit.

The actress also talked about the surgeries a trans-woman goes through and said it is not just simple castration and boob-job. She explained it by saying the decision is “a life-altering surgery that makes your life better, for whoever chooses to do it.” It appears the life of Zion Moreno not only changed, but it was also made better by her decision to get the surgery. 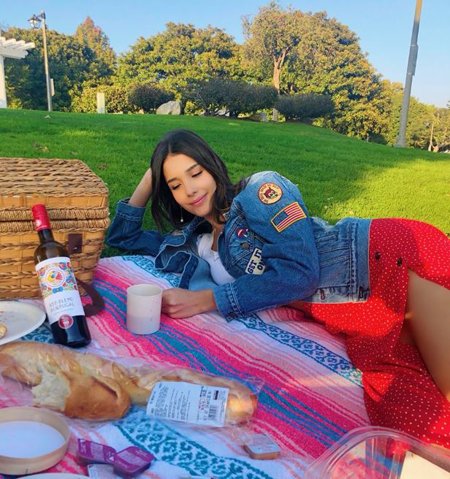 Zion Moreno is a self-professed bad poet and picnic lover, and she uses her Instagram to show off the later part. The actress is active on the image sharing site, with close to 450,000 followers, Zion is Instagram famous. There are hundreds of fans who flock to her comment section to share their affection and adore the talented actress/model.

When it comes to her relationship status, the actress seems to be single at the moment. There are no pictures of a special someone in any of her social media profiles, and the Zion appears to be focused on planting her feet firmly in Hollywood before being romantically involved with someone. The actress is focused on her career, and all the signs point to Zion Moreno being single at the moment.