Michael Shanks was born on 15th December 1970 in Vancouver and later raised in Kamloops, British Columbia. The actor attended the University of British Columbia before enrolling in the BFA Acting Program for four years from 1990 to 1994.

Shanks, who’s got several stage credits to his name, served a two-year apprenticeship with esteemed Stratford Festival in Ontario. He is best known for Stargate SG-1 (1997-2007) and Saving Hope (2012-2017). Michael Shanks is married to his actress wife, Lexa Doig, with whom he’s occasionally shared a screen. The couple’s wedding was held on 2nd August 2003. 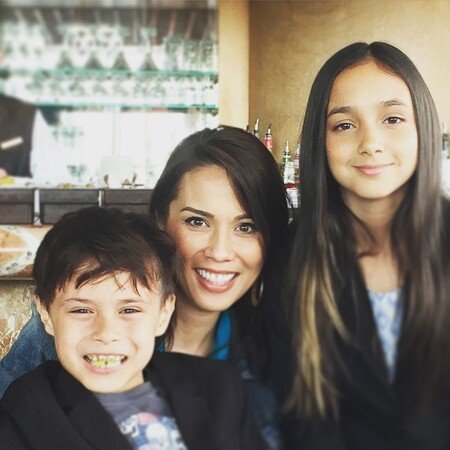 The couple first bumped into each other on the set of a Canadian/American science fiction series Andromeda (2000) when Michael Shanks got cast to make a guest appearance in the show starring his then-future wife, Lexa Doig. The duo made two more appearances together later in the series.

Andromeda is not the only show this wonderful duo starred together. In fact, they featured in Stargate SG-1 (2005-07) and later in an action thriller movie Tactical Force (2011). In the latter film, Shanks played the role of a Russian mob leader while Doig featured as an LAPD SWAT officer. Away from their professional life, the couple revealed the secrets to their long-lasting marriage in 2017. Michael Shanks and Lexa Doig currently reside in Vancouver, British Columbia, with their kids and two cats. The entire family couldn’t look more adorable.

Michael Shanks Career and Net Worth Michael Shanks’ net worth is estimated to be $3 million.
Source: The Movie Database

Michael Shanks’ most notable credit came through the portrayal of archaeologist Dr. Daniel Jackson for five seasons in a military science fiction series Stargate SG-1. At the end of season five, however, the actor left the show citing creative differences. Michael didn’t agree with the direction the series was heading, and neither was he too fond of the under-utilization of his own character.

Despite the differences, Shanks made minor guest appearances in season 6, followed by the full return in season 7 and onwards. During the show’s final season, the actor signed up for 16 of the total 20 episodes. He took some time off in March 2006, following the birth of his third child and the second one with his wife, Lexa Doig.

Michael later featured in a couple of Stargate films reprising his role as Dr. Daniel Jackson. These include Stargate: The Ark of Truth (2008) and Stargate: Continuum (2008). Earlier, he also made guest appearances in the spin-off series Stargate Atlantis (2004-2008).

Besides the Stargate franchise, the actor most notably appeared as Dr. Charlie Harris for 85 episodes in a supernatural medical drama Saving Hope (2012-2017). Most recently, Shanks played the role of Will Sanders in Unspeakable (2019) for eight episodes.

Michael Shanks’ net worth is estimated at $3 million.

The actor made a brief cameo in ‘Virgin River’ (2019) alongside his wife, Lexa Doig

Virgin River is an American romance drama based on novels by author Robyn Carr. The series premiered on Netflix on 6th December 2019.

The show follows the character of Melinda “Mel” Monroe (Alexandra Breckenridge), who moves to the remote town of Virgin River in California, upon answering an ad to work as a midwife and nurse practitioner. Mel believes this is the perfect place to start fresh and leave her haunting memories behind. However, she soon realizes moving on isn’t quite as easy as it seems, so she must find a way to heal herself before she can truly call Virgin River her home.

Meanwhile, Lexa Doig plays a recurring role as Paige Lassiter / Michelle Logan. Interestingly, her real-life spouse Michael Shanks portrays the character of Wes. In the show, Michelle describes Wes as an abusive husband she’s been running away from along with her son. Wes, who allegedly threatened to kill them (as per Paige), is on a hunt looking for his wife and son. Michelle Logan subsequently changes her identity to Paige Lassiter upon arriving at Virgin River. However, Wes soon arrives in town and starts inquiring about his missing wife.

Following a brief cameo in season 1, Michael Shanks will likely enjoy a far bigger role in season 2 as Paige’s backstory gets further explored. Virgin River got renewed for a second season in December 2019.